What Kind of Wine Is Bellissima Prosecco?

Bellissima Prosecco is a Brut Prosecco, the driest version of the popular Italian sparkler. Coming from the Veneto, northern Italy, this bubbly is aromatic and elegant, with gentle fragrances of apples and baked bread and a creamy mouth of peaches. Fantastic to sip with seafood, especially shellfish.

The region of Veneto is in Northern Italy, close to Lake Garda to the west of Venice. It reaches the foothills of the Alps and ends in the flat plains of the River Po in the South. The climate is warm with moderate rainfall, while the cooling influences that come from the altitude expose vineyards to a beneficial diurnal range. Because of these conditions, crisp Proseccos are possible since the Glera grapes maintain their freshness and acidic nature during the growing season.

Crisp and approaching, Bellissima Prosecco is a great example of Italian winemaking. The fragrant bouquet is packed with citrus and green fruit, while the palate shows flavors of peaches, brioche bread, and cherries. At the same time, the mousse is creamy and blends nicely with a racy acidity. Bellissima Prosecco encompasses all of those unique characteristics that distinguish an excellent Prosecco, making this wine a must-have for people that love their sparklings. All of this means that Bellissima is truly ‘Bellissimo’!

This sparkling has fine bubbles, providing a refreshing and creamy tasting experience. Bellissima Prosecco opens with delicate notes of green fruit and florals, accompanied by hints of brioche bread. The mouth displays sweet stone fruit and tropicals framed by a stimulating acidity. The finish is just as any Prosecco fan would want: Creamy and lengthy. Serve it as an aperitif or with seafood.

Bellissima Prosecco wine has a straw-yellow hue, which is quite attractive. The core is translucent, and after a few vigorous swirls, it opens into elegant lemon-green highlights near the rim. This transformation is very appealing. The legs of the wine are watery and medium because of the low alcohol content. Yet, they do offer beauty and contribute elegance to the vibrant appearance.

Bellissima Prosecco is fragrant, exhibiting bright aromas of apple, pear, citrus, and brioche bread. In addition, nuances of honeysuckle, wisteria, and rose petals are also present on the nose, interlaced with touches of grapefruit and Meyer lemon. For sure, Bellissima Prosecco is going to impress wine enthusiasts with its aromatic intensity and enticing bouquet.

On the palate, pronounced flavors of stone fruit and tropicals dominate. Peaches, apricots, nectarines, and guavas combine together to form a creamy, delicious mouth. On top of this, subtle tastes of pineapple and mango complement the other flavors and blend with traces of stone, butterscotch, and strawberry. Nutty sensations are discernible, as well, mainly notes of almond and hazelnut. The mousse is fine, while the acidity is racy and stimulating.

Bellissima Prosecco finishes long and creamy. The hints of florals and green fruit, shown previously on the bouquet, remain, joining lingering tastes of pineapple and white peach. The back-palate, therefore, is rounded, pleasing, and quite tasty. In other words, Bellissima Prosecco concludes the tasting profile triumphantly.

Bellissima Prosecco is a great Prosecco. In fact, if you are looking for an approachable, yet delicious sparkler, this Prosecco is for you. The creamy effervescence is compelling, as it is also the brisk acidity. Similarly, the aromatic bouquet is fragrant, packed with green apple and the palate is textured, filled with tastes of peach and pineapple. Consequently, Bellissima Prosecco is absolutely delicious!

A Brut Prosecco, such as Bellissima Prosecco, always tastes delicious when served with crab cakes, grilled calamari, smoked tuna, and seafood tapas. On top of this, pairing the wine with sea bass, red snapper, or grouper is also a great way to enjoy its crispiness and juiciness. In fact, the citrus character perfectly matches the tenderness of the fish meat. Clams, shrimp, and scallops served alongside hearty pasta accompany the Prosecco’s creamy mouse divinely, too. And when you do not feel like cooking, your staple takeaway pepperoni pizza is a safe choice with Proseccos, as well.

For cheese pairing, baby Swiss and Parmesan make good combinations with Proseccos. In fact, you want to pair buttery, earthy-flavored cheeses with dry, bubbly whites. So, do not go overboard and stick to the basics. Bellissima Prosecco is also amazing as a cocktail or aperitif, perfect for elevating your social gatherings. Chop a bit of melon, ice it, and place it in a flute or white wine glass with a dash of Bellissima. Add some melon or coffee syrup too, and you have a refreshing cocktail.

Bellissima Prosecco is a product of Bellissima, a winery based in Veneto, northern Italy. It is a creation of Christie Brinkley, who has appeared on over 500 magazine covers and starred as Roxie Hart in Broadway’s Chicago the Musical. On top of this, Christie has performed in TV and films and is the author of a New York Times best-selling beauty book. In her journey to preserving and creating beauty in herself, others, and the natural world, she decided to produce Bellissima Prosecco and other sparkling wines. Her wines are made exclusively with organic grapes and biodynamic viticulture.

How Is Bellissima Prosecco Made?

Proseccos are produced using the Charmat fermentation method, also known as the Tank Method. This fermentation process ensures a balance of sweetness and sparkling acidity, allowing Proseccos to preserve their fruit-forward varietal character. After harvest, the Glera grapes are destemmed, pressed, and crushed to release their liquid, which, essentially, is grape juice. This juice undergoes two separate alcoholic fermentations.

During the first, it is placed inside large tanks to preserve fruitiness and freshness. Afterward, it goes into a different vessel, this time pressurized, to conserve natural vibrancy. After fermentation, the juice is filtered from sediments and bottled, again, under pressure. In this way, the preservation of all of the fresh fruit characteristics is successful. The resulting sparkler is vibrant and refreshing.

Where Is Bellissima Prosecco Made?

Every Prosecco wine, including Bellissima Prosecco, is produced from the Glera varietal in the Veneto. The Prosecco vineyards are atop hilly areas near the Alps. Veneto, as a region, has a moderate climate with sweet summers and occasional rainfalls. The Alps form a barrier, sheltering the vineyards from rain and preventing the appearance of rot. A complex trellising system called Pergola is used in the Veneto, protecting the grapes from sunburn and enabling the air to circulate, minimizing the risk of rot. In this system, the vine canopy is trained high.

The grapes hang down below a horizontal leaf canopy, sheltering themselves. Italy showcases a large number of indigenous grape varieties and creates a vast range of wine styles. It is a winemaking region that has been making wine for over a thousand years. And it is also a champion of the notion that the vineyard location (appellation) is more important than science and the winemaker’s role in the production of wines.

How to Serve Bellissima Prosecco?

As an elegant sparkler, Bellissima Prosecco is best served in flute glasses. The foamy bubbles and the pronounced aromas concentrate in the small environment of the glass. Then, they are released towards the top, collapsing on the nose. If flute glasses are not available, standard-sized white wine glasses are great, too. They also help to aerate the wine, releasing its aromatic and flavor intensity. Generally speaking, Proseccos require chilling. Strive to cool Bellissima Prosecco for up to 4 hours before serving (40-48°F or 6-8°C).

So, place the bottle in the fridge before opening it to ensure it reaches the ideal temperature. Keeping Bellissima Prosecco cool during service is a piece of cake. You just need an ice bucket. The bucket should be filled three-quarters full with equal quantities of ice and water so that iced water surrounds the bottle. The water is then able to transfer the heat from the wine bottle to melt the ice. Air acts as an insulator, and the bottle chills. Keep in mind that over-chilling hides the flavors in wines. You should avoid that.

How Much Does Bellissima Prosecco Cost?

How Long Does Bellissima Prosecco Last?

Proseccos are known for their aging potential. And Bellissima Prosecco is not an exception to the rule. On the contrary, the wine has to be consumed as young as possible. The stone and green fruit flavors might vanish if consumers take too long to uncork the bottle. Additionally, the wine does not have the structural components required to withstand aging, like tannins, high alcohol content, or high sugar levels. For the best taste, consume your Bellissima Prosecco within 6 months from the date of bottling.

How Many Calories Does Bellissima Prosecco Have?

Therefore, the wine is super friendly to people on low-carb diets. This wine is guaranteed to be totally Vegan too! In general, Proseccos, just like most Italian sparkling wines, do not show high alcohol content. Consequently, Bellissima Prosecco alcohol content is 11.5% per 750ml bottle, which, as previously mentioned, is a typical alcohol concentration for an Italian Prosecco.

Crisp and approaching, Bellissima Prosecco is a great example of Italian winemaking. The fragrant bouquet is packed with citrus and green fruit, while the palate shows flavors of peaches, brioche bread, and cherries. At the same time, the mousse is creamy and blends nicely with a racy acidity. Bellissima Prosecco encompasses all of those unique characteristics that distinguish an excellent Prosecco, making this wine a must-have for people that love their sparklings. All of this means that Bellissima is truly ‘Bellissimo’! 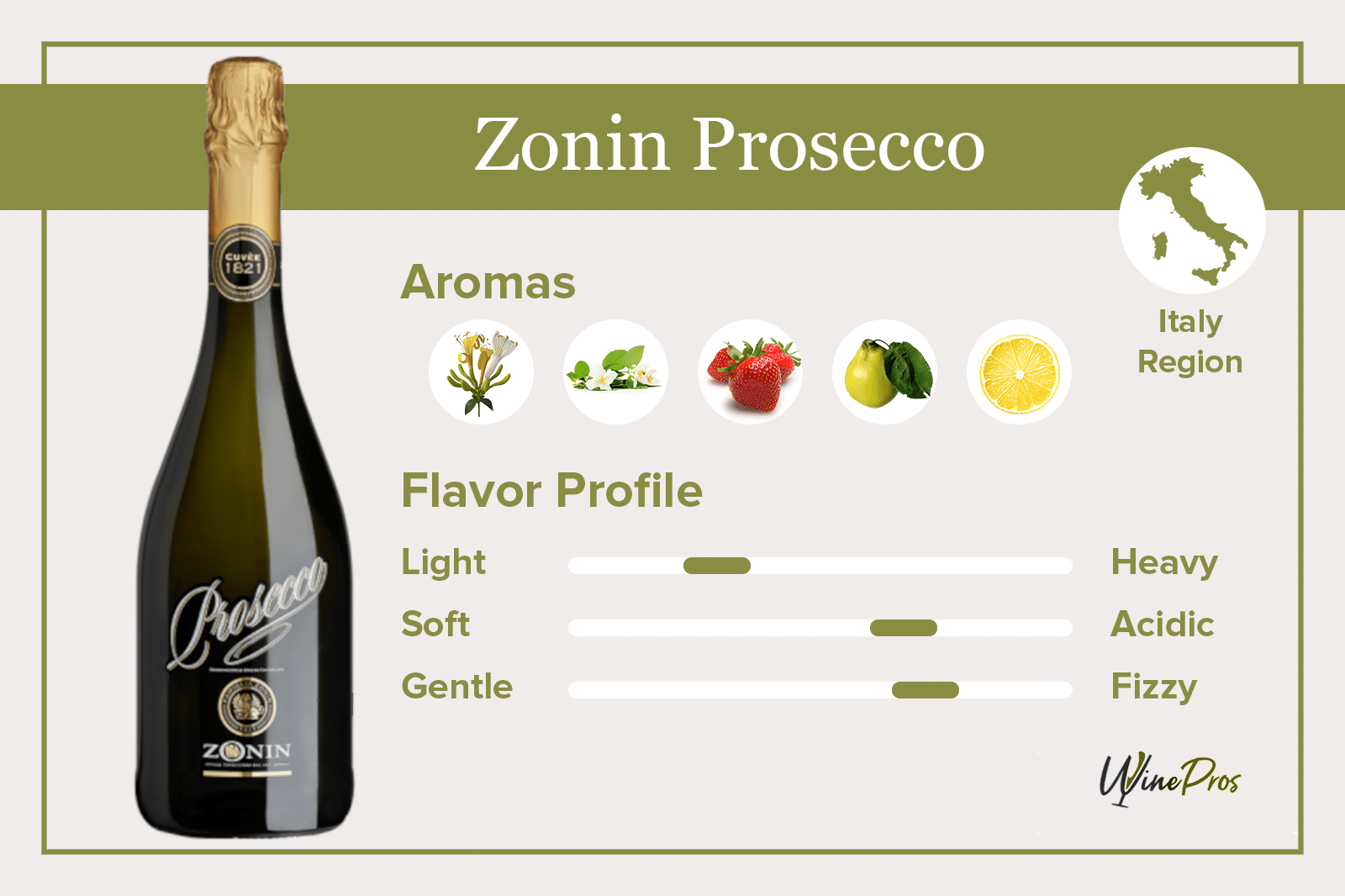 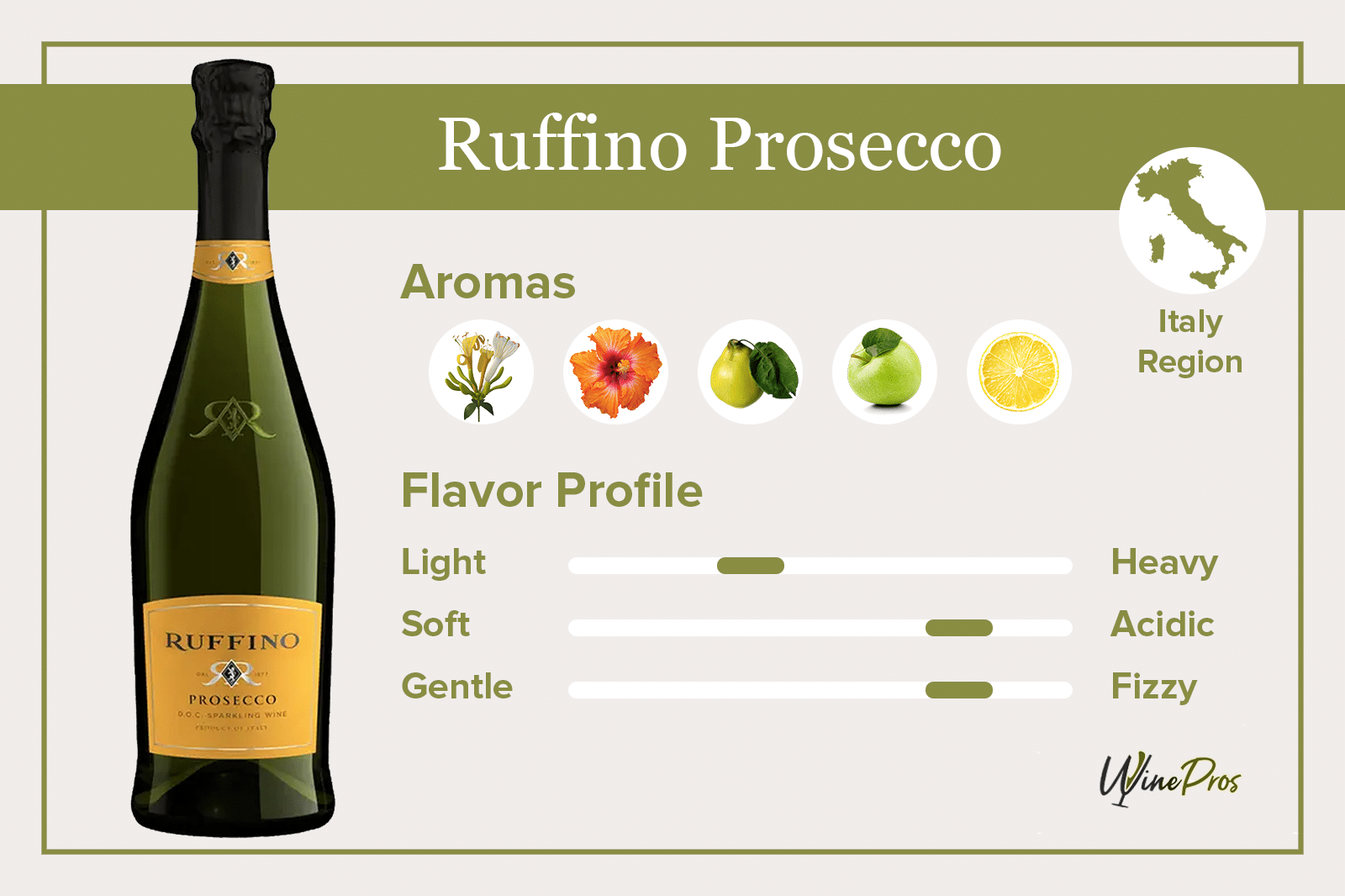 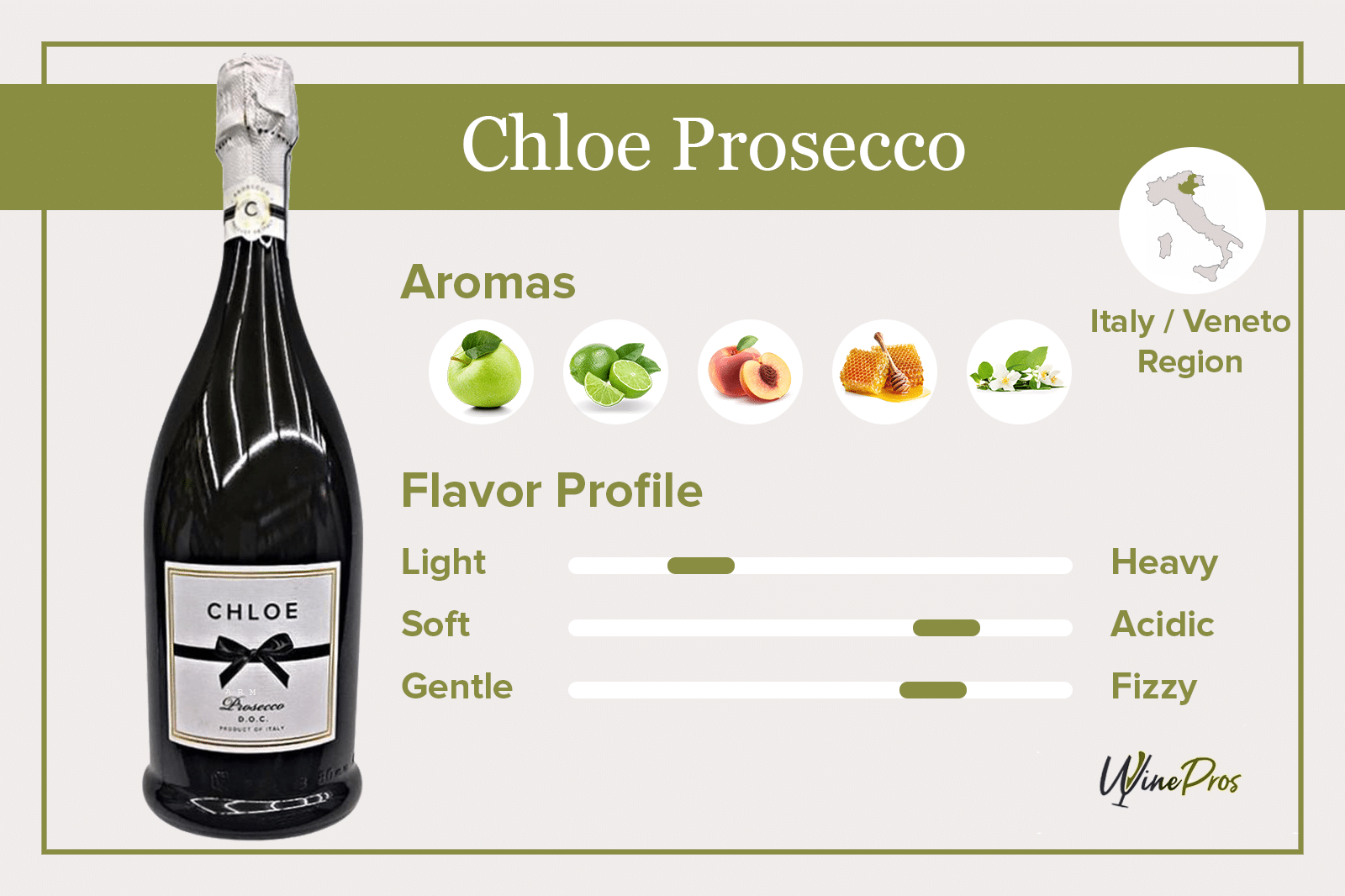 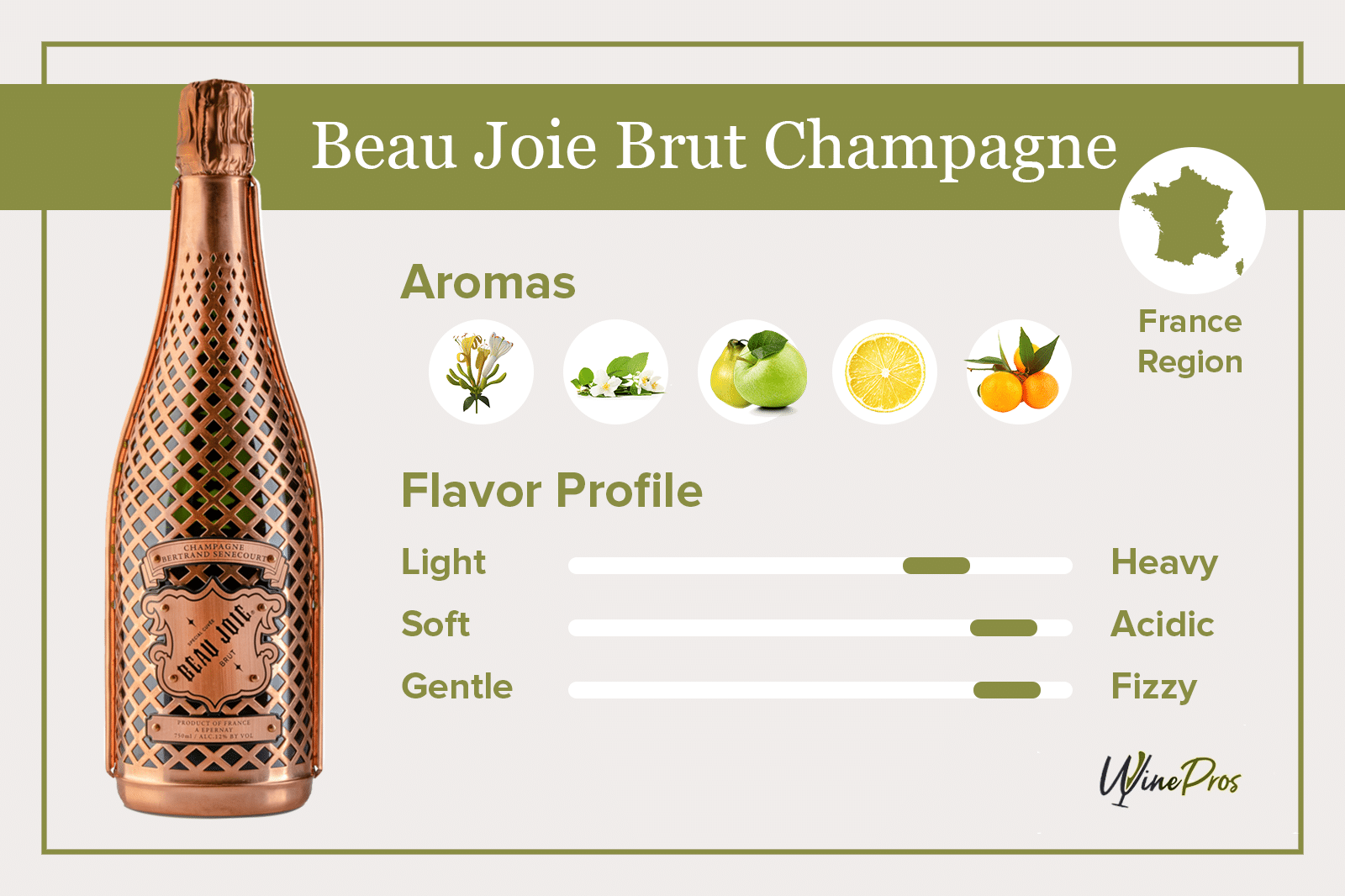 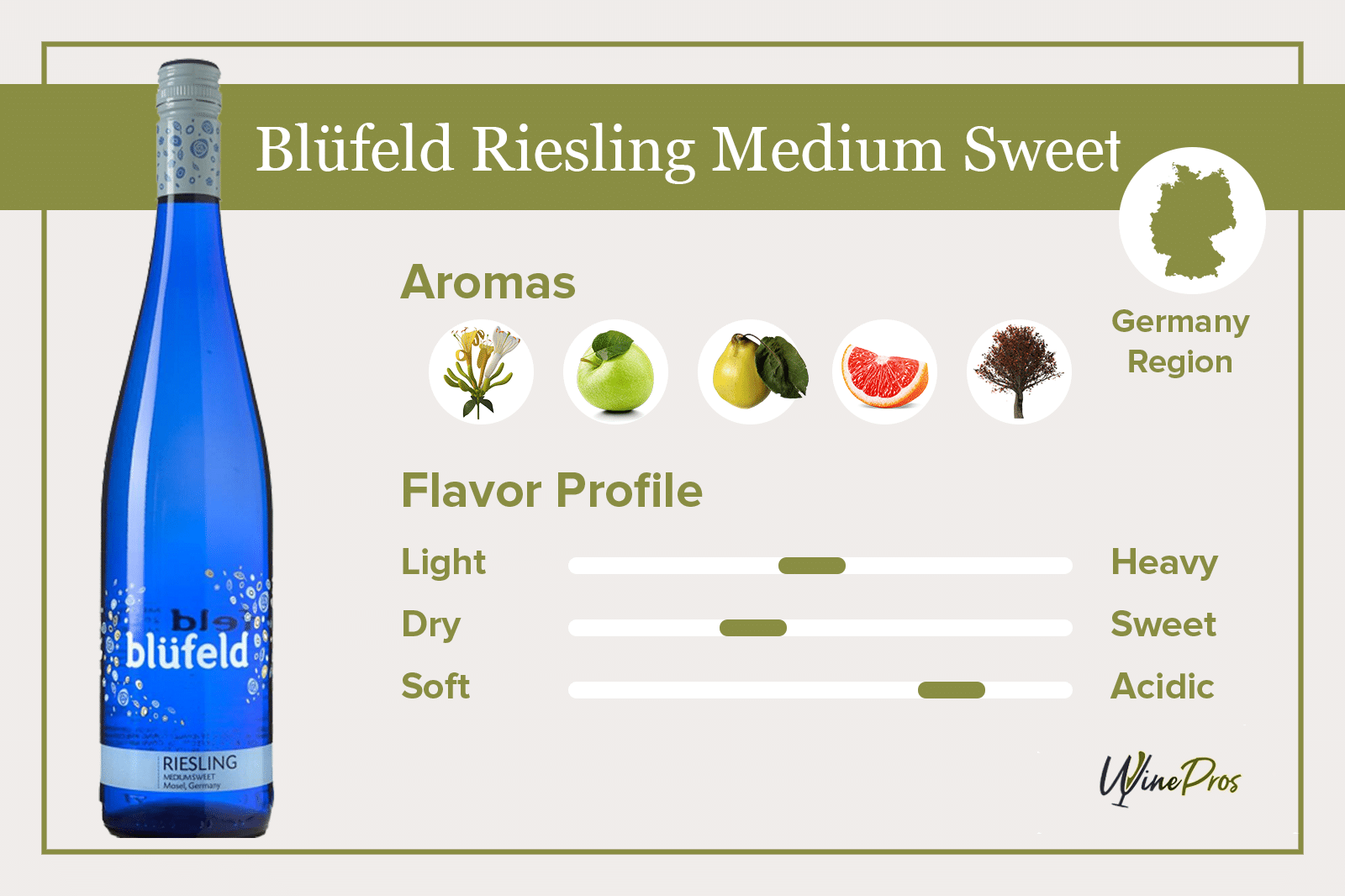 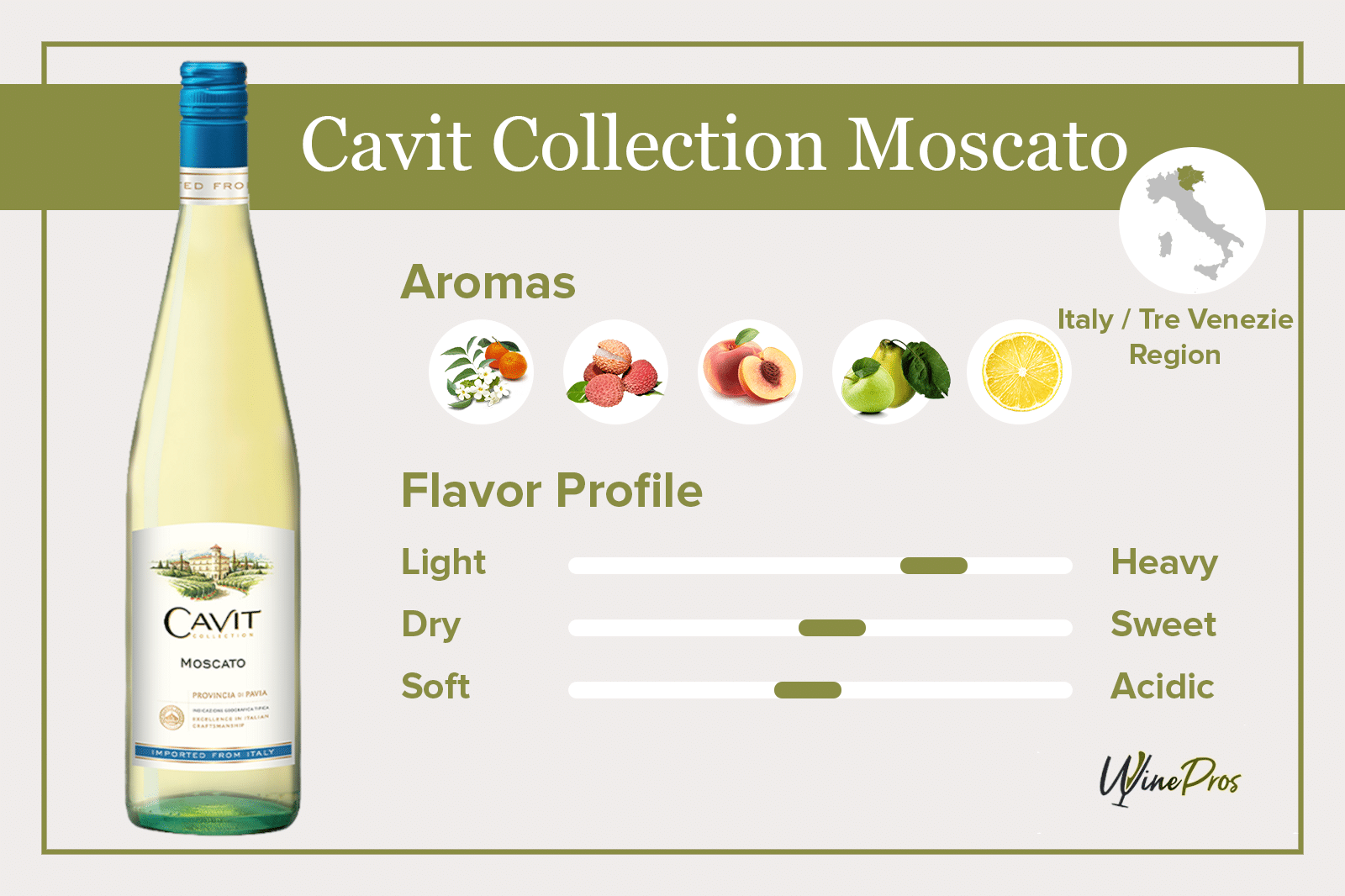